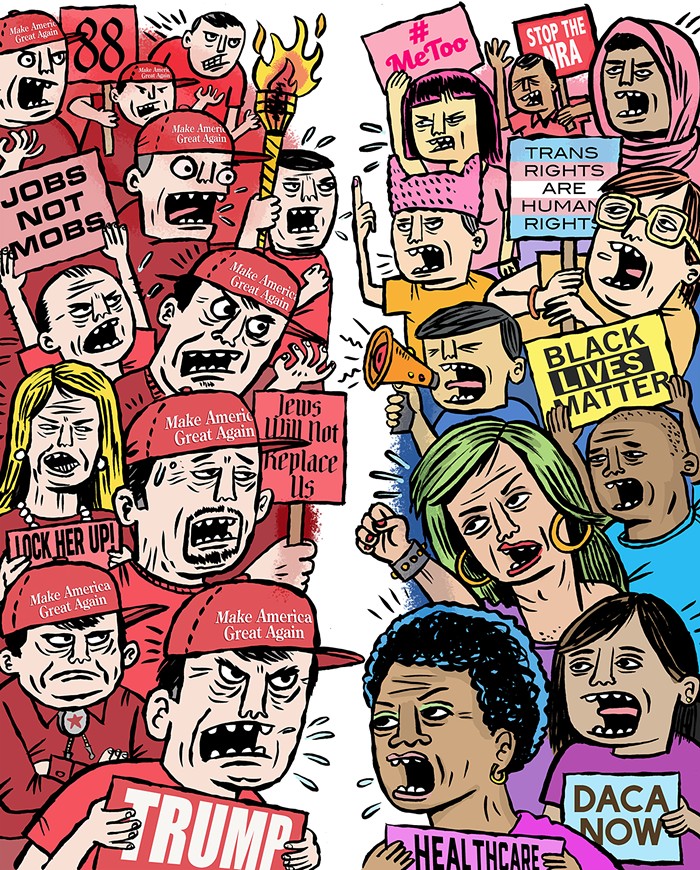 This Economist article offers an interesting analysis, further confirming the extent to which social group identities are the proper unit of analysis in understanding American politics today.

This could provoke a lot of discussion, but I want to respond to the opening sentence in that article. I’m doing this because I believe the thinkers of the Scottish Enlightenment and their best students (America’s “Founding Fathers,” especially Madison and Hamilton) were very well aware that “all politics is identity politics” and offered many forgotten but helpful insights into how to think about how democracies can seek to reconcile political freedom and the propensity for factional division within a liberal order. I’ve thought this for a long time, but am more confident in that judgment after hearing Stephen Pinker defend a similar thesis when discussing his new book Enlightenment Now on the Ezra Klein show.

The Economist article states “America’s Founding Fathers envisioned a republic in which free-thinking voters would carefully consider the proposals of office-seekers.”

If by “envisioned” the Economist means “expected,” then this is simply wrong. While they believed there was no safer repository for the rights and interests of the people than electoral accountability (and other mechanisms of popular control over government, such as jury trials), they knew the people were unlikely to be informed and thoughtful in their voting behavior. Regarding those who thought the people’s judgment in the ballot box would be the best guide to wide and virtuous public policy, Hamilton wrote in Federalist 71:

” … such men entertain very crude notions, as well of the purposes for which government was instituted, as of the true means by which the public happiness may be promoted.  The republican principle demands that the deliberate sense of the community should govern the conduct of those to whom they intrust the management of their affairs; but it does not require an unqualified complaisance to every sudden breeze of passion, or to every transient impulse which the people may receive from the arts of men, who flatter their prejudices to betray their interests. It is a just observation, that the people commonly INTEND the PUBLIC GOOD. This often applies to their very errors. But their good sense would despise the adulator who should pretend that they always REASON RIGHT about the MEANS of promoting it. They know from experience that they sometimes err; and the wonder is that they so seldom err as they do, beset, as they continually are, by the wiles of parasites and sycophants, by the snares of the ambitious, the avaricious, the desperate, by the artifices of men who possess their confidence more than they deserve it, and of those who seek to possess rather than to deserve it.”

In short, Hamilton and other founders expected the people to be highly prone to manipulation by elites — to, for example, have their passions stoked by demagogues and to place their trust in those more interested in exploiting than deserving that trust. (Sound familiar?) Importantly, this did not mean, as is often said, that the founders thought essentially unchecked elite rule was the answer to the problems with the demos. As they fully admitted, the source of popular confusion was typically self-interested elite manipulation. Instead, they believed there must be some sort of mixed regime, in which the principles of democracy and aristocracy coexist, contribute their unique benefits to the safety and happiness of the people, and mitigate the dangers/weaknesses of each. For example, elsewhere Hamilton said “If government [is] in the hands of the few, they will tyrannize over the many. If (in) the hands of the many, they will tyrannize over the few. It ought to be in the hands of both.” Hamilton was the most extreme of the generation in favoring strong literal aristocratic and monarchical elements (as well as democratic elements) in a genuine mixed regime. Most, like Madison, sought a more thoroughly democratic regime admixed with many quasi-aristocratic elements. But even Hamilton thought the democratic element, however confined, should be “in full force” — with at least one part of the legislature as responsive to ordinary citizens as possible and juries being firmly in place for criminal trials. Nevertheless, none of them were optimistic that voters would routinely be informed and thoughtful.

Instead, the Founders understood that human reasoning is “motivated,” and that in a modern liberal republic — unlike, say, in classical Greek republics in which thoughts and beliefs were thoroughly controlled by the state — the combination of political freedom and liberal freedom of thought, expression, commerce, and religion would lead to group divisions based on religion, ideology, race, economic status, etc. And, in its detrimental form, this would lead to factions, defined by Madison as political groups “who are united and actuated by some common impulse of passion, or of interest, adverse to the rights of other citizens, or to the permanent and aggregate interests of the community.” When factionalism reigns, the republic is jeopardized because politics becomes beset by what we now call “negative partisanship,” in which us-them thinking leads to a greater desire to hurt and dominate “the other side” than to cooperate toward common goals — including the goal of preserving the liberal republican order. As Madison put it in Federalist 10:

“As long as the reason of man continues fallible, and he is at liberty to exercise it, different opinions will be formed. As long as the connection subsists between his reason and his self-love, his opinions and his passions will have a reciprocal influence on each other; and the former will be objects to which the latter will attach themselves. . . .  The latent causes of faction are thus sown in the nature of man; and we see them everywhere brought into different degrees of activity, according to the different circumstances of civil society. A zeal for different opinions concerning religion, concerning government, and many other points, as well of speculation as of practice; an attachment to different leaders ambitiously contending for pre-eminence and power; or to persons of other descriptions whose fortunes have been interesting to the human passions, have, in turn, divided mankind into parties, inflamed them with mutual animosity, and rendered them much more disposed to vex and oppress each other than to co-operate for their common good.”

Madison thus knew that identity politics is unavoidable – at least so long as we do not extinguish political and liberal freedom (something he declared to be “a cure worse than the disease”) — but he also knew that, fortunately, not all identity politics is factional.  Madison is famous (in Federalist #10) for proposing a novel solution to the problem of faction: have Burkean (i.e., quasi-aristocratic) representatives and a large republic. The Burkean (Madison actually endorsed this theory before Burke did, so it should be called “Madisonian”) representative’s desire for social reputation as virtuous public servants would lead him toward responsible decision making. And, in a large republic, identify politics by subgroups within electoral majorities would prevent such majorities from feeling or acting upon a common impulse adverse to the rights of minorities or to the common good.  But even he knew these solutions were inadequate, even setting aside his clear but incomplete understanding that innovations in transportation and communications technologies could render a large republic effectively as prone to factionalism as a small one. Even he thought more was needed, including efforts to avoid extreme economic inequality–thus dampening the bite of class-identity-based animosity and resentment — and a formidable foreign adversary–thus creating a common national identity that dampens more particular ones and ignites a willingness to cooperate for the common good. Both of these solutions were informed by a deep understanding that all politics is identity politics; that this can manifest in “class conflict” as well as non-economic forms of division; and that some forms of identity politics can help, whereas others can harm, a liberal republican order.

Do I think the founders offer helpful specific solutions to our current era of factionalism run amok? I don’t think I do, but I do think their often under-appreciated group-identity-centered social psychological perspective on public opinion and behavior is the paradigm within which we should seek our solutions. The Economist is typical by here holding up either a mythical version of the founders’ themselves, or a false idealized account of their “visions,” as a standard by which we criticize our present as a falling from grace. I’m more interested in how their social scientific paradigm — one that has been resurrected today by political psychologists, stratification economists, and social psychologists — can help us more fully explain, and (I think) figure out how to weather, the present storm threatening liberal democracy.